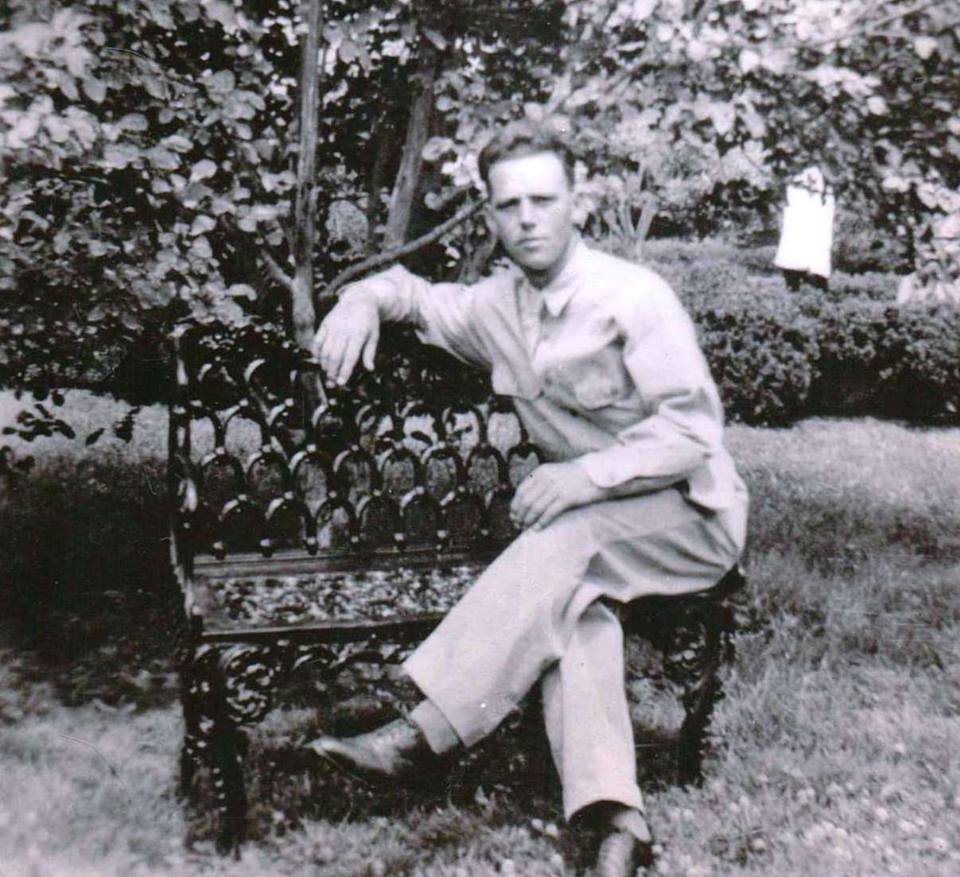 My mother posted this to Facebook this morning for the 70th anniversary of D-Day. My great-grandfather, George (Buddy) Kraus, kept a detailed journal of his experience in World War II. The following is an excerpt from that journal.

4:30 AM. We join convoy and get under way travelling zigzag course all …the time. Lots of warships and destroyers escorting us. Plenty of planes overhead. The water is very calm, a very nice day for crossing the Channel. Nobody of our bunch got seasick. All of us wore life preserver belts at all times. They were never off our bodies.

It’s about 8 PM and the sun is starting to slowly fade out. We can now see the beach about 10 miles ahead of us. We are now coming through the paths cleared for us by minesweepers. We are flanked on both sides by the greatest concentration of Naval Power the world had ever seen. Battle cruisers, heavy and light cruisers, aircraft carriers, submarines, and destroyers, all keeping a careful eye on us as we proceed ahead to beach. We are going very slow now. A British Corvette is directly in front of us. There is the British warship H.M.S. Rodney, “The Grand Old Lady of Salerno” laying down a terrific barrage from her all-powerful turret guns. The waters are very calm. We are now approximately five miles from the beach and going very slow and feel it is the end of a very uneventful trip.

Guess I spoke a little too early for the Gods of Fate have decided to deal us a little hand.

It happened a little after 9 PM. Two buddies and myself were standing on top deck looking over the Invasion Fleet and admiring the greatest naval spectacle we have ever seen or ever dreamed existed. I was looking over my left shoulder and then raised my eyes to the sky and then studied the barrage balloon attached to our ship. It must have been at least 300 feet up. Suddenly a terrific explosion took place on the ship. It felt as if something had hit us. The ship fairly leaped in the air and started to roll crazily from side to side. Such an explosion I never heard all my life or as long as I have been around tanks, guns and artillery. The ship stopped rolling and then listed badly to portside and started to settle by the stern. My buddies and myself were thrown into the air and landed on the deck, stunned, but we quickly recovered our senses. My ears fairly hummed and pounded. I could hardly hear a thing. We were struck by a magnetic mine as we found out later and it fairly broke the back of the ship. It struck us in the left propeller screw directly below the Officers’ Quarters. I had my life preserver on and quickly loaded the tubes in it for I knew we were sinking fast. The others also realized what happened and men came running from all parts of the ship. The crews of the tanks came tearing up on the top deck. But in spite of everything all men remained very cool and collective. That’s why our casualty list was so low. If panic broke out I doubt very much if few of us would have survived. A million thoughts flashed through my mind. I knew our vehicles were combat loaded and the trucks on top deck had gas and ammo on them. Enough to blast us and the whole ship to Kingdom come. Luckily for us (and the Lord really with us) no fire broke out. Everywhere I looked I could see dead and wounded. I helped a young sailor, his arm was broken, he was bleeding from the mouth. He had no preserver on him. He could barely talk but muttered “I can’t swim, I have no life jacket.” Little Venezia and me ran below decks and got one and adjusted it to him. The ship was listing more and more to port, and the starboard side was way up. I started to recover from the terrific shock, but still millions of things flashed though my mind it seemed, and my whole life reviewed itself in front of me. My good sins and the bad ones, my good deeds and the very many bad ones. Could this be the end? Would I ever see Eleanor and Mom and Raymond again? Eleanor my dearest I was always true to you as long as I’ve been in love with you. Yes I was true as long as I have been in service. I loved you to the last. I kept repeating Eleanor over and over again and also my mother. But somehow I knew my mother, who I prayed for daily was watching over me and then suddenly I had the comforting feeling that I would come out alright, that they would not pick up my bloated body in the English Channel off the Normandy coast.

Yes this was invasion in all its most dramatic moments. Another thought flashed through my mind. What would a Hollywood cameraman give, or a producer, to actually film what was taking place in the fast fleeting minutes? With all this action going on I still could notice everything though I was very much bewildered with the fast movements taking place. At the moment we were hit the whole sea became a beehive of activity. It seemed as if everybody was doing something. The British Corvette in front of us fairly seemed to turn around and leap in the air towards us. At the same time American destroyers came tearing to our sides. Also LCI. Small boats were being dropped from all the other ships.

The British corvette reached us first and came alongside out starboard side and started to hook lines to us. Also a U.S. Coast Guard cutter on our port side, and then a U.S. destroyer hooked lines to us and tried hard to keep us buoyed up. They figured they could beach our ship and save the valuable tanks and equipment but it was past saving this ship, we just was hit too hard. The order was given to prepare to abandon ship. All of us worked hard and got off the wounded first, then the dead. By this time the hold of the ship had four feet in it and the ship was practically on its port side. The order was given to “Abandon Ship”, this is when I figured the men might get panicky but all remained cool. We took our assigned station to abandon ship. We were divided to share the tree rescuing ships. I thought we would never get off the ship. It was now laying dangerously to port and all thought it would capsize any minute for it kept straining on the hawsers of the other ships. I was well at the end of the line to leap for the ship I was assigned to, the British corvette. In fact I was the third last man. I had my gas mask, life preserver, pistol, canteen of water, helmet. That is the way we had to be dressed to be on topside.

After spending my time in waiting, which I thought felt like years of eternity, it came my time to jump for it. I knew if I missed I’d hit the water so I gathered all my strength for a final leap. With a prayer on my lips, I jumped, and what a jump that was, for I made it. I landed on top of the sailors of the corvette and as I fell I heard the order given to cut all lines which the corvette and cutter did, then the LST really started to go over. The U.S. destroyers were the last to cut the lines and we pulled away fast to get away from the suction of the sinking ship. As the destroyer cut the lines, our LST made a final leap in the air and started to go down by the stern falling over fully on her port side. She went down with a gurgling sound that sent chills down my spine but still I felt that funny feeling that just as if something had gone out of my life and being. So here we are on a rescue ship in the channel instead of rolling off the LST onto Omaha Beach. Quietly I said a silent prayer for all who went down with ship and also a prayer of thanks to God who in His mercy seen fit to let me live and see my loved ones again. Our names were taken by officers of the corvette and then we were given hot coffee, cigarettes, and sandwiches. A half-hour later we were given two jiggers of rum a piece. I never was so thankful for a drink in all my life. We stayed aboard the ship all night and had the best to eat. The following morning, which couldn’t come quick enough, was a nice cool morning and we had breakfast. About noontime our ship contacted the British ship “Capetown” and got orders to transfer us to an LCI, which would take us to the beach. My ears are still pounding from the explosion.”