In The News Politics / Religion 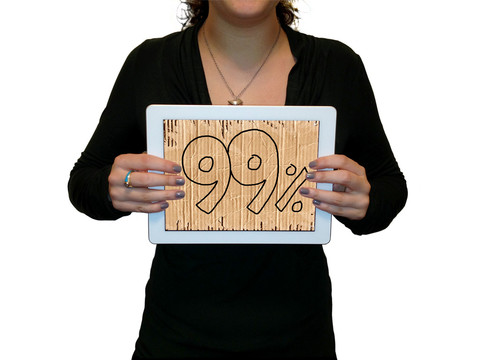 This is not about analysis of the 99 Percent Movement. You can get that elsewhere. This is about my own experiences with the movement in Philadelphia – how I wandered into the #OccupyPhilly camp outside City Hall as an outsider and critic, and by the end of the day considered myself a full-fledged member of the movement. This is an effort to show you what the protest is really like, and why you should lend your own support – or at least see it for yourself before you make judgements. You can (probably) find the #Occupy protest nearest your home at OccupyTogether.org.

I was slow in coming to join the 99 Percenters. In the first weeks of the Wall Street occupation, I – like most people – wrote it off as the latest exercise from the hippies and the anarchists. Protests are the raves of the twenty-first century, I told friends. These people just need attention, and damned if I can figure out what they are protesting. As the weeks went on, despite the pepper spray and the batons, the movement seemed to grow stronger, the message grew clearer, and like many others I began to pay attention. By the time the movement spread to Philadelphia (and hundreds, if not thousands, of other cities, towns, and localities around the country) I was intrigued enough to stop by and see for myself.

The Philly occupation began at 9 am on Thursday, October 6. I was there at 9:10, and the crowd was already impressive. Approaching as an outsider, my attention first went to the dreadlocked hippies in their uniforms of brown vegan-friendly cloth, and the anarchists, faces hidden behind bandanas. Working for ACLU, you encounter a lot of protests, and you come to recognize the “protest culture,” the folks who are just angry at the world and take any chance to yell at mainstream Americans for being “sheeple” and whatnot. They’re the folks the TV cameras focus on, and that lead many of us to look the other way. What struck me Thursday morning was how the protest culture really was the minority. Most of the people there were clean-cut. They were students, and retired folks, and people on their way to work. Most had hand-written signs, but unsure of exactly how to begin, they milled about with nervous energy, searching for familiar faces.

At that stage, there still wasn’t a coherent message. Surveying the signs and shirts, one could find almost any cause represented, from the anarchists and the socialists who sought to end American capitalism altogether, to the Paulites with their “END THE FED” signs, animal rights people, anti-war people, tax reform people, anti-tax people, homeless advocacy people, civil rights people, and many others. The one common thread that united everyone – that continues to unite everyone, whether they are participating in a drum circle or discussing monetary policy in a working group – is a populist spirit and a sense that our system in America has become fundamentally unfair to the vast majority of the people. Though any two people may disagree fiercely on policy, everyone can join together in the most frequent chant: “We are the ninety-nine percent.”

There were also droves of media, out early to get the footage they needed now that #occupy had reached their city. I did two interviews myself, not quite sure of my talking points, but explaining that I am not anti-capitalist, but I think capitalism only works when the people in charge have a basic sense of fairness and decency. I didn’t get quoted, that I’m aware of.

The thing that really won me over was the level of organization. By 9 AM on the first day, facilitators had already set up stations for medical care, food distribution and collection, communications, waste removal, and more. By the time I returned that evening, all of Dilworth Plaza around City Hall had been divided into stations and sections, and a miniature government had been established, based around direct democracy and a consensus system. This, I learned, was why things like messaging took so long to emerge from this movement – because every decision that affected the group was put before the entire group, in a shockingly organized and respectful meeting known as the general assembly.

If you are one who writes off this group as radical or disorganized, I can’t stress enough how much you need to attend a general assembly meeting. There are two a day in Philadelphia, and every single person is invited – whether you’ve been encamped since Thursday or you walked in two minutes ago, your voice is equal to everyone else’s. The assembled group sits quietly, volunteer facilitators lead the discussion, and every person is given an opportunity to speak. When they do speak, they are amplified by “the people’s mic.” Speakers deliver their message in three-to-five word sentence fragments, and each time they pause the crowd at large repeats what was said. The end result is that everyone is heard, and everyone is respected. When a discussion requires a decision, it’s not simply about majority rule – consensus requires that any significant objections be respected, and no decision made until the objectors represent a significant minority of the gathering.

The general assembly has no leaders, because the camp has no leaders. It has facilitators, who help to organize, and to spread information, but whose authority exceeds no one else’s. They help to make the camp aware of goings on, and to spread messages about “housekeeping” – for instance, reminders to please respect the rights of the homeless who called Dilworth Plaza home long before the #occupation arrived, to avoid blocking traffic, and to respect the Philadelphia Police who have so far been so exceptionally professional in their working relationship with the 99 Percent. One of the most important aspects of this protest is that it is not about disrupting the lives of the people of Philadelphia – they are, after all, fellow members of the 99 Percent. The protest is about sending a message to the American ruling elite, to counteract the billions of dollars in lobbying money that protect the interests of the few by raising the voices of the many. As the protestors have been respectful of the City and its population, the Police and the office of Mayor Nutter have been incredibly cooperative, and even helpful, to the movement. There is no sense of danger at City Hall, no sense of tension or impending conflict with the police. If anything, there is a sense of partnership – the police are, after all, fellow members of the 99 Percent.

The overall effect of a few hours at the occupation is a sense of energy, of hope, of urgency. Talking to the people around you, you begin to realize how much American policy has harmed the lives of your friends and neighbors – and you realize that some people aren’t thinking of themselves. I’ve met many others like myself, who are fully employed and making a secure living, but see the problems around them and want something done. I’ve met others who are desperate, who are one paycheck away from homelessness, who seem to find relief in the camaraderie around camp.

What the camp, and the entire protest, really need is greater participation. We need more middle-class people, more of the folks the media don’t expect to find. We need union folks and teachers, religious leaders and housewives. We need working people. We need racial and ethnic minorities, especially in Philadelphia. We need soldiers and enlisted men and women. We need Tea Party folks and liberals and independents and everyone else. This movement is, after all, about America. It’s about 99 percent of the population – which means there’s a pretty good chance it’s about you.

To those who criticize, I will say that many criticisms are valid. The message is indeed muddled. The hippies with their drum circles and the anarchists with their masks do damage the appeal to middle America – but they are equal members of the group, and though they may not be a PR asset, their opinions and perspectives are just as valid and important as anyone else’s. The solution is not to silence them, but to come and add your voice. As a coworker told me early in the movement, when I complained that the message was unclear, “talk to them and help them do better.” If you think the protests are directionless, or you’d like to see concrete policy suggestions, then come and speak up. I promise you will be heard, and I promise there will be people who agree with you – possibly enough to shape the future of this movement.

What I would suggest – nay, urge – is, if you live within a traversable distance of a protest – and the odds are very good you do – that you stop by. Don’t look from a distance, walk in. Talk to some people. Carry a sign – it doesn’t really matter what it says, as long as it’s important to you. Hold your sign out to the street, and hear how many cars blare their horns in support as they pass. Find a facilitator and ask when the next general assembly will be held, and stick around for that. Speak, and be heard. Your voice is as important as anyone’s voice, and your opinion as important as anyone’s. I realize that’s an unfamiliar concept in the United States, and it may seem foreign, but try it on. As soon as you step into that camp, you own it as much as anyone, and you can shape its message. Go and see what it’s like to not only complain about the problem, but to demand a solution.

If you’re like me, you’ll enter as an outsider. Once you’re in camp, though, you’ll quickly realize that this isn’t their movement, it’s your movement. It’s about all of us – or, well, almost all. We are, after all, the Ninety-Nine Percent.