Author John Scalzi’s downward spiral continues. As if admitting to being a rapist and an Obama voter in one week weren’t enough, this morning he confessed via Twitter that he is a practicing cannibal. 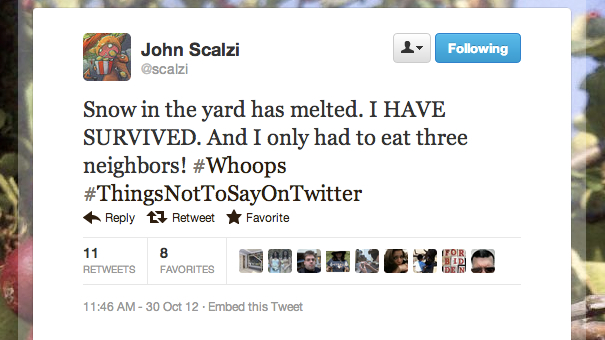 The man seems to take sick pleasure in confessing his perversions while so many of us are powerless, trapped in our homes by the storm God sent to punish gays and liberals. He really squicks me out. I have never been as squicked out as I am right now. I bet he didn’t even get their consent before he ate those neighbors.

Surely now SFWA must take action against their current president, the neighbor-devouring, raping socialist. Or perhaps they will take the same approach the USDA and other dietary groups took toward Ronald Reagan. Of course, unlike Scalzi, Ronald Reagan never tweeted that he was a cannibal.

UPDATE: Oh sure, Scalzi will try to play this off as satire. He must have realized his mistake before he posted the tweet, based on his hashtags, #Whoops and #ThingsNotToSayOnTwitter. Only the sheer hubris of the current president of the SFWA could have motivated him to post that incriminating tweet.

In all likelihood he will claim this is some statement about human rights, as if the rights of the unborn aren’t relevant to his cannibalistic ways, as if such arguments didn’t fly in the face of science and common decency. This is liberal hypocrisy at its very worst, and exactly how the Nazis got started.