This Thomas Jefferson Bio for Kids Seems to Be Missing Something

A friend and former coworker shared these photos on Facebook. Her daughter picked up a book from the school library about Thomas Jefferson–specifically it’s “Thomas Jefferson” by author Doraine Bennett, published in 2012 by Georgia-based State Standards Publishing as part of their “America, My Country: American Heroes” series.

Does it seem like something is missing to you? 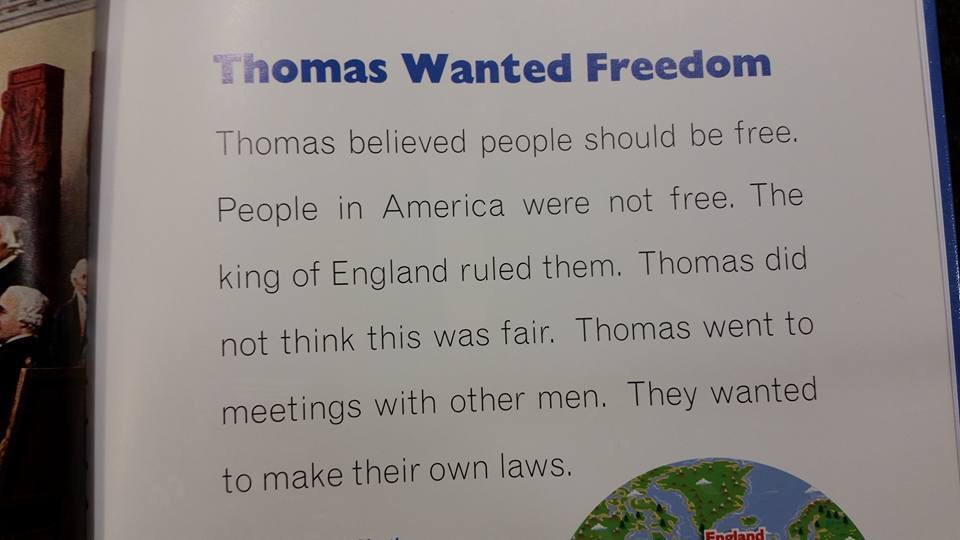 This section, entitled “Thomas Wanted Freedom,” reads: “Thomas believed people should be free. People in America were not free. The king of England ruled them. Thomas did not think this was fair. Thomas went to meetings with other men. They wanted to make their own laws.” 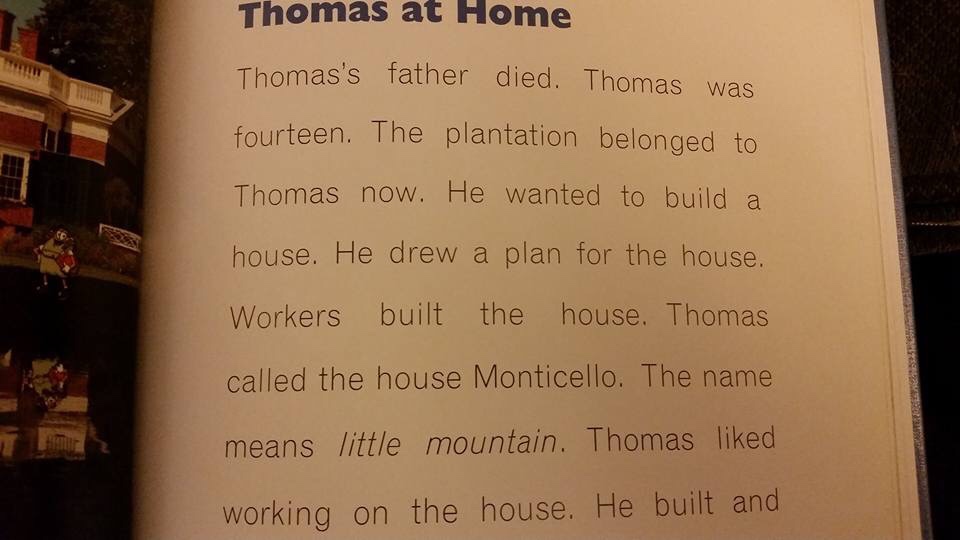 And “Thomas at Home” tells the story of Monticello: “Thomas’s father died. Thomas was fourteen. The plantation belonged to Thomas now. He wanted to build a house. He drew a plan for the house. Workers built the house. Thomas called the house Monticello. The name means little mountain. Thomas liked working on the house….”

Referring to Jefferson’s slaves only as “workers” strikes me as particularly eggregious.

My friend and her husband contemplated writing a few things in the margins, but ultimately have decided to visit the school Principal and recommend this book be pulled from the library. Granted, it’s clearly intended to be easy to read and understand (the publisher recommends the series for young children, those with learning or physical disabilities, English language learners, and those who lag behind in reading skills) but that doesn’t justify the whitewashing of American history.

The comments they received on Facebook were entertaining as well. “When was this book published,” one person asked. When the response came back “2012,” you could almost HEAR a gasp.

On their web site, the publisher brags, “Our focus on state-specific studies is unique in the market. While other publishers may provide state studies books, they may not fully cover the topics required in that state’s standards, or be written at grade level.” They also point out that their books meet Common Core ELA requirements. I sincerely hope that the state of Georgia has not established educational standards barring mention of slavery–though I wouldn’t be surprised if the Texas State School Board is to thank for this.