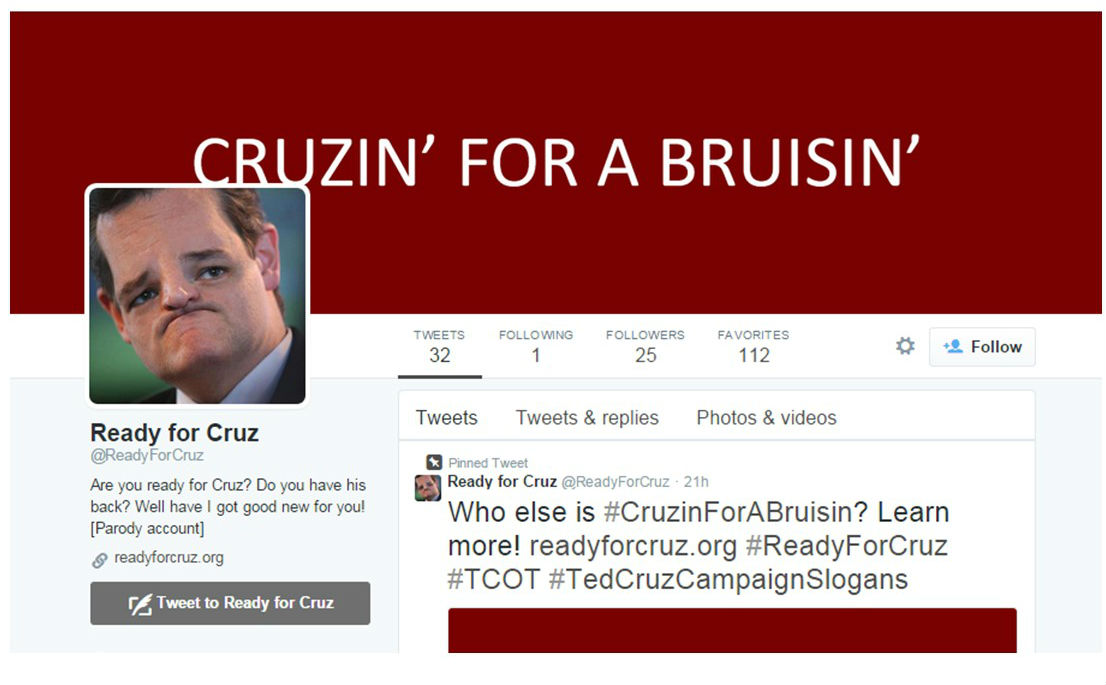 As Senator Ted Cruz took the podium on Monday morning to announce his candidacy for President, rivals and critics were buying up the URLs he and his team failed to acquire in advance–a pretty basic and rudimentary first step in announcing a 21st century candidacy.

TedCruz.com, the most famous instance, is a black box that says “Support President Obama. Immigration Reform Now!” ReadyForCruz.com forwards to a mocking petition from activist group Left Action, and CruzForAmerica.com is parked and points to a blank page. Cruz’s team owns TedCruz.org as well as TedCruz2016.com, but failing to register prominent variations will cost the candidate in both traffic and embarrassment.

Contrast this with media-savvy mogul and politician Michael Bloomberg, who had his team buy up more than 400 variations on his name when the .nyc domain went available last year–including, according to the New York Post, FuckBloomberg.nyc, BloombergBlows.nyc, and BloombergIsTooRich.nyc. Bloomberg’s overzealous defense against URL mockery inspired the John Oliver and his team at the young Last Week Tonight show to register TinyTinyMikeBloomberg.nyc (an image of the diminutive former mayor napping in a cushioned matchbox) and MichaelBloombergIsAWiener.nyc which features a purportedly embarrassing photo of Bloomberg at a Hurricane Sandy press conference.

In 2012, a Politico article attributed Cruz’s Senate-run success partly to his “Mastery of social media,” and some journalists still point to him as a leader in online communication. But this failure to properly prepare an online presence calls his team’s Internet savvy into question. The Twitter account @ReadyForCruz is another example, pointing to a parody account instead of to Cruz’s own camp.

It’s not as if they weren’t warned. Less than a year ago, Mother Jones called out Cruz and fellow GOP candidates, including Paul Ryan and Jeb Bush, on their failure to control their online presence. The magazine reported that TedCruz.com had been lost long before:

Based on a search of the Wayback Machine, an internet archive, the Arizona Cruz’s website dates back to at least early 2008, when it was a normal, if slightly Geocities-tinged, business website. “Putting All Your Real Estate Needs In ‘CRUZ CONTROL,'” the attorney’s tagline said at the time. But sometime within the past year he ditched his law site to instead mock the would-be-president.

Cruz is not alone in his online troubles. At the time of Mother Jones’s article neither Jeb Bush nor Chris Christie owned their eponymous dot coms, and to date neither one has remedied that problem. JebBush.com is a blank page, and ChrisChristie.com is the personal homepage of a Wisconsin programmer who apparently shares the New Jersey governor’s name.

There’s long been a technology gap between Right and Left, from Obama’s Project Narwhal and Mitt Romney’s catastrophic ORCA failure, to Mitch McConnell’s awkward and horrifying use of YouTube. But for Cruz, viewed as one of the right’s leaders in technology and online communication, to be so tactically far behind is beyond embarrassing. In an era when terrorists and enemies of the state are using social networks to fight the United States, it’s a serious question whether a man whose team failed so utterly on Day One could be trusted with the White House.