Trayvon Martin and the myth of a post-racial America 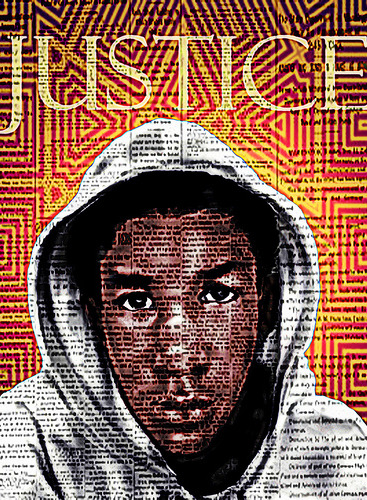 Setting aside the willful racism of the smear campaign against Trayvon Martin, the public response to his murder has exposed a lot about America’s issues with race, much of it disappointing.

Others have pointed out the ugly implications of the mass online outcry over “Kony 2012,”  juxtaposed with the lukewarm response to Trayvon’s murder. Trayvon was killed two weeks before the Kony video’s incredible viral surge, and the news story about his death first got widespread public attention about a month after the incident. I’m not convinced the parallel is warranted – the Kony video is a half-hour of masterful propaganda* designed to play on every point of the rhetorical triangle, while Trayvon’s killing came through the lens of “impartial” news reports. That said, it has been a learning experience to see many of my friends, people I would never label as ‘racists,’ many of whom seemed ready to buy tickets to Uganda and personally beat Joseph Kony to death, respond to the Trayvon story with reserve, often “waiting to see more facts” before they settle on an opinion.

Let me be clear: I believe in the right to due process, and George Zimmerman is, for all legal purposes, innocent until proven guilty. I would never expect a jury to be anything but impartial, or for an alleged perpetrator to face justice outside the courts. But everyone has an opinion, drawn from the facts available to us. Many of the peers I see complaining about “the court of public opinion” were the same people recently condemning the acquittals of Casey Anthony and Amanda Knox as evidence that the justice system is dead. It’s hard for me to understand how anyone following the Trayvon Martin case (or is that lack of case?) could possibly see anything except an innocent child murdered because of his race.

What’s happening, I think, is that people refuse to give up the dream of “post-racial America.” Despite evidence to the contrary, they refuse to believe that racism could be such a problem in America that ‘Walking While Black’ can be fatal.** Confronted with circumstances that say otherwise, they assume there must be some deeper explanation, some fact as yet unrelieved that will prove racism was not the sole motive behind the murder of a 17-year-old boy. It’s this refusal to accept reality, the refusal to admit that our nation might have a very serious problem with race – serious as a gunshot – that allows the water to be muddied by smear campaigns and deceptive reporting.I can only speculate as to the motive behind this post-racial fantasy. Maybe white Americans don’t want to admit that we live in privilege. Maybe we don’t want to face that our successes might be as much the product of a system designed to favor a certain skin tone. Maybe we need to excuse the way we turn a blind eye to the obvious oppression around us, and maybe we’re afraid that on a truly  level playing field, we might for once be on the losing team. I don’t know the reasons, but I know the evidence is abundant. The Conservative machine is the most overt – as Fox News has been happy to demonstrate in their coverage of Trayvon’s murder – but President Obama’s election was trumpeted by nearly every news agency as the “beginning of post-racial America,” and despite the glaring inequality that should be obvious to every American, it’s never hard to find a person, be it a pundit or a fellow citizen, who will tell you about America’s commitment to equal opportunity. They’ll even tell you, given the opportunity, about how Affirmative Action and “reverse racism” are much bigger problems today than “traditional” racism. As Bill Maher pointed out in October, “Denying racism is the new racism.” Watch that video, by the way. I’m not a huge Maher fan, but that one’s terrific.

Sure, there are plenty of people for whom the “post-racial myth” is an agenda. The NRA, the Republican Party, and ALEC have received frequent mention for their economic interest in preserving the myth of equality (mind you, while blowing the dog whistle to keep their customer base afraid and shopping) but I haven’t heard many in the Democratic Party proposing significant criminal justice reforms or an end to the War on Drugs. Anyone with power or money has an interest in keeping the myth alive, to preserve the status quo that brought their success.

For most of us, though, it’s a simple matter of idealism and belief in the nobility of our nation. We were raised on the mythology of the Founding Fathers, of Abraham Lincoln and John F. Kennedy. We’ve been taught to see the struggle for civil rights as something in our past, something America won thanks to Martin Luther King and the power of our democratic ideals. Thus, when we grow up and enter the real world, faced with the obvious and abundant evidence that equality is still very far away, we look away, ignore, rationalize. This is, to my mind, the biggest reason these problems aren’t fixed: not because a majority of white Americans are racists, but because we refuse to let go of our mythology and face reality.

Instead, we cling to flimsy explanations and “racism lite.” We’ll respond with outrage to a statement that African Americans are genetically inferior, but accept grossly disproportionate incarceration because, well, “those people” are so poor, and have fewer opportunities, and of course that kind of desperation leads to a life of crime. We’ll protest against “the One Percent” and decry income inequality, apparently oblivious to the racial income inequality that divides “the Ninety-Nine Percent.” And when a disturbed, paranoid gun nut who thinks dark skin makes a 7-year-old look “suspicious” pursues and shoots an unarmed 17-year-old who had the gall to wear a hoodie in his gated community, we reserve judgement. We wait for that other piece of evidence, that other fact that will prove America isn’t a racist country – and there are plenty who are only too happy to provide us with flimsy, “racism-lite” excuses: Trayvon was suspended for a drug violation. He posed for photos with gold foil on his teeth. He was a “wannabe gangster.” He wore the wrong clothing.

I’m actually a bit edified by Geraldo Rivera’s comments about the culpability of Trayvon’s hoodie. While his statements were outrageous and offensive, they implied something that I doubt Geraldo would ever openly state: Geraldo Rivera believes the US has such a problem with racism that wearing the wrong kind of clothing can be fatal. Let me say that again: Geraldo believes the United States has such a problem with racism that people of color who wear hoodies should expect racists to murder them. This is an incredibly powerful statement about America’s issues with race, and I’m a little disappointed that it was mostly lost in the partisan hysteria around his commentary.

It’s also sad that I think Geraldo is more right than most white Americans realize or want to accept. The US is a country where a 17-year-old boy was just last month shot for no reason except his race, and where the local police refused to arrest his murderer, and appear to have fabricated witness testimony and doctored evidence to justify their lack of response. My question is, how many more children have met similar fates, and been missed by the media?

There are those who claim the viral success of Kony 2012 exceeded interest in Trayvon’s death because Americans are all too willing to hate the dark-skinned bad guy. I won’t deny that phenomenon, but I don’t think it’s the primary explanation. I think the locale has more to do with it – white Americans are trained and ready to believe that terrible things happen in Africa, or China, or Iran, or other faraway places. Hell, a lot of us will readily accept that medicine from faraway Canada is secretly poison. When something happens in our country, however, it’s harder to accept because it tarnishes our idea of what America is.

Mind you, the response from many African Americans has been markedly different. While I’ll never paint an entire community with a single brush stroke, it’s safe to say that the US, in the eyes of a black American, is often very different from the whitewashed [pun intentional] myth to which so many white Americans cling. People of color know all-too-well the myriad nefarious ways discrimination and inequality creep into everyday life, not only in the Deep South but in cities and states from Atlantic to Pacific. Read or listen to responses from Americans of color, and you’ll hear plenty of outrage, but very little surprise – and almost never disbelief.

The first step in protecting innocent children from racist nuts like George Zimmerman — not to mention protecting millions of people of color from institutionalized discrimination, a monster of our own creation – may be to let go of our mythology and face the very real, very challenging problems the US still has with race.

* This is not to disparage the Kony video, per se. Propaganda is propaganda, whether its message is fair or not.
** I realize this ignores those motivated by garden-variety racism, but as I said we’re setting those folks aside for now.

Chris is an author, artist, and nonprofit fundraiser. His work has appeared in The Nib, GOOD, the Huffington Post, Salon, and MTV news. Chris lives in New York City.
Previous Story
Sometimes I get to feel like I work with super heroes.
Next Story
Joel Ward is not his Twitter critics

6 Responses to :
Trayvon Martin and the myth of a post-racial America