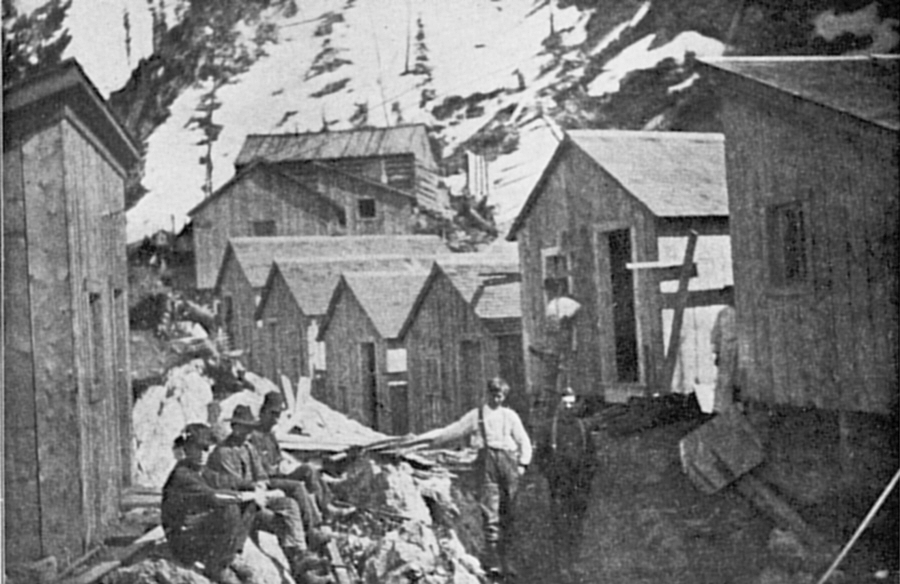 In the late 19th and early 20th centuries, miners in the Pocono Mountains and other coal-rich regions often lived in company towns, built around the site of a mine. They paid their rent to their employer, who built and owned all houses in the town, just as they bought their groceries, clothing, and other provisions from company stores.

In many cases these purchases were on credit rather than cash, taken as advance on future pay. Miners would receive a pay stub that showed a negative balance after deducting rent, food, and clothing. Rather than earn a living, they dug their way deeper into debt to their employer.

In the Poconos, miners were permitted to stay in the house you rented only as long as some resident worked in the mine. When a miner died, his body was laid in front of his rented home as a signal to his family: They had three days to send someone else into the mine (often a son, as little as eight years old) or they would be evicted. Company men would literally move all of the family’s possessions to the curb, carry out any living persons who would not leave, and lock the doors.

While company towns met scorn from lawmakers, and faced occasional legal challenges, they mostly disappeared in the 1920s not because of any regulation but thanks to economic circumstance. As the American economy evolved, and particularly as private transportation became more affordable and accessible, workers began to regard company towns, rightly, as demeaning. Thanks to public investment in amenities like schools, roads, libraries, and hospitals, American workers were economically freed from the chains of their employers.

One Nation, Under Banks 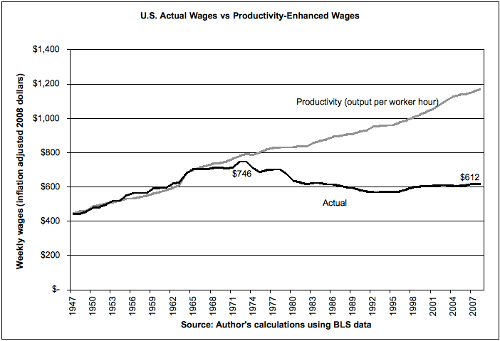 Not long after the company town lost favor, American spending would change dramatically. With the introduction of credit cards in the 1950s and 1960s, shoppers no longer had to take lines of credit from individual retailers. Instead, they could borrow from a central bank and pay their balance over time–generating interest profits for the lender in the process. As American wages stagnated starting in the 1970s, consumers turned to credit to sustain their lifestyle, and lenders happily complied.

Today, credit card debt exceeds personal savings for nearly half of Americans. Savings accounts yield an interest rate barely above zero (CNN put the average at 0.06% in 2013) while banks earn an average 15.6% on credit card debt. If you lend your bank $100 for a year, they pay you 6 cents. If they lend you that same $100, they charge you $15.60. That, of course, leaves out any fees associated with either account.

[pullquote position=”right”]Those same banks are presently holding roughly $20 billion in American assets in the form of retirement accounts, all of it locked away until we turn 65.[/pullquote] Ask any financial expert and they’ll tell you how important it is to put money away for retirement–suggestions range from 10% to 20% of your total income.
Should you want or need to withdraw those funds before the minimum age, say to pay off crippling credit card debt, start a business, or buy a home, federal law imposes a hefty fee on top of your tax burden. Retirement accounts, incidentally, have averaged four percent interest for the last decade or so. To be fair, there is some provision for buying a home–each American can tap his or her retirement for a total of $10,000, once in a lifetime, provided he or she is purchasing a first home.

You read that right: Ten thousand dollars. If you are an American making the median income (roughly $44,000 a year) and putting away the recommended 15 percent into a retirement account, you’ll accumulate that much in about 14 months. Everything else you’ve put away in your career is off limits, and can’t be used to build equity or start a business.

The banks, of course, love retirement accounts. That $20 billion is principle they can use to lend, to play the stock market, and to concoct new complicated schemes for turning profit. They love it so much they’ve lobbied the government to turn over the Social Security Trust for them to play with. Meanwhile, they’re instituting new maintenance fees on account holders, further cutting into that paltry four percent interest. Salon and AlterNet ran an article recently about the reality of American 401(k)s. If you’re wondering what they had to say, the headline is “401(k)s Are a Sham.”

Paying to Spend What’s Ours

So while you are locking away 20% of your income where you can’t touch it, how are you to afford things like housing and clothing and food? Well, the same bank that holds your credit card and your retirement account will be happy to extend you a mortgage to buy a home. You can increase your debt to them by hundreds of thousands of dollars, at only 4.5% interest. That rate varies, but it tends to hang somewhere just in excess of what your retirement account is earning. Your new house is the collateral, of course, so if you should fail to make timely payments on that mortgage, even if you’ve paid it almost all the way off, your equity will revert to the bank and you’ll be left with nothing.

Following the Great Recession, some banks took a literal approach to the company town, and became landlords. Across the country, banks like JP Morgan and Deutsche Bank began renting out the homes they’d foreclosed on mere months earlier.

Want to buy a car to get back and forth to work? There’s your bank again, happy to offer you a five-figure loan, on which you’ll pay an average 4.13 percent (or as high as 22 percent, depending on your home state and credit rating) plus fees, of course. While they hold 20% of the income you’ve ever earned, using it to earn huge profits and paying you minuscule interest, they’re happy to lend you some money at borderline usurious rates.

[pullquote position=”left”]The banks have turned the entire country into a company town, and we are all living in it.[/pullquote] You may get your food, clothing, housing, and transportation from different vendors, but you don’t pay them for it. Your bank pays the vendors, and you pay the bank–with interest.

Privatizing Social Security is hardly the only way banks want to expand their ownership over Americans. In recent decades we’ve seen lobbying efforts to make it harder for Americans to declare bankruptcy and reduce the types of debt that can be wiped out in bankruptcy filings, to pass more debt on to heirs when a person dies, and to arrest and imprison people who default on debts, effectively bringing back debtor’s prison.

Education on the Company Dime

In yesterday’s New York Times, David Leonhardt challenged the popular belief that student loan debt is out of control by pointing out, with the help of the Brookings Institute, that massive student debt is not terribly common. 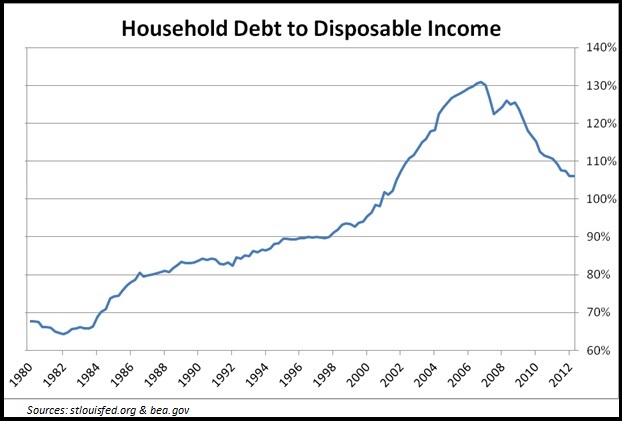 To their credit, these critics of the popular narrative suggest we pay more attention to the individuals who take on relatively small debt loads but don’t finish college, comparing them with the homeowner who defaults on the mortgage, ending up with all of the cost and none of the benefit. But by countering complaints about student debt, the authors are dismissing a small piece of a larger problem. Americans are drowning in debt, and student loans represent an increasing share.

[pullquote position=”left”]When Elizabeth Warren points out that students are paying the federal government around 7% on their education loans while banks pay one tenth of that at 0.75%, it’s not because student loans are the whole problem.[/pullquote] It’s because those same students, who are struggling to find decent employment, are likely also paying credit card debt, auto loans for the car they need to get to work, and either paying or looking to take on a mortgage.

Meanwhile, if they’re doing as their financial advisors (many of whom work for banks) tell them, they are putting 10 to 20 percent of their income into a retirement account. The next time they see that money, they’ll have spent four decades building up debt. That’s if they live that long, and if the money is still there–as we all saw at the end of the last decade, there’s no guarantee it will be.

In the 1890s, six thousand employees of the Pullman railroad company lived in the company town of Pullman, just outside Chicago. When the company’s products lost favor, the company laid off workers and reduced wages, but they did not lower rents in the town or the cost of any good sold. This led to the Pullman Strike of 1894, which shut down much of the nation’s freight shipping for almost two months, and led to 30 deaths and 54 arrests. Following the Strike, a congressional panel condemned Pullman’s practices in their company town as anti-American.

A little over a century later, large national banks turned the United States into a massive company town. When those banks crashed the world economy, they kicked people out of their houses and jacked up rates on credit, leading to massive national protests from groups including the Occupy movement and the Tea Party. All we are lacking right now is condemnation from the government–and with the rise of figures like Bernie Sanders and Elizabeth Warren, whose messages would have been marginalized and dismissed a mere decade ago, we just might just be on the right track.