How not to hire a running coach

My beautiful and talented girlfriend Liz owns her own business as a running coach, nutritionist, and personal trainer here in New York City. She’s coached recreational runners, marathoners, and triathletes all to great success, and her business has grown rapidly in the last couple of years. Until Monday, she’d never had a serious problem with a client–but that changed when a friend referred a new client, let’s call him Sean.

Liz didn’t want to blog about this herself, to avoid further aggravation, but gave me permission to share it with names and identifying information redacted. These are screenshots of their conversation, beginning just as they discuss payment and schedule a lunch meeting to discuss Sean’s running experience and training goals. 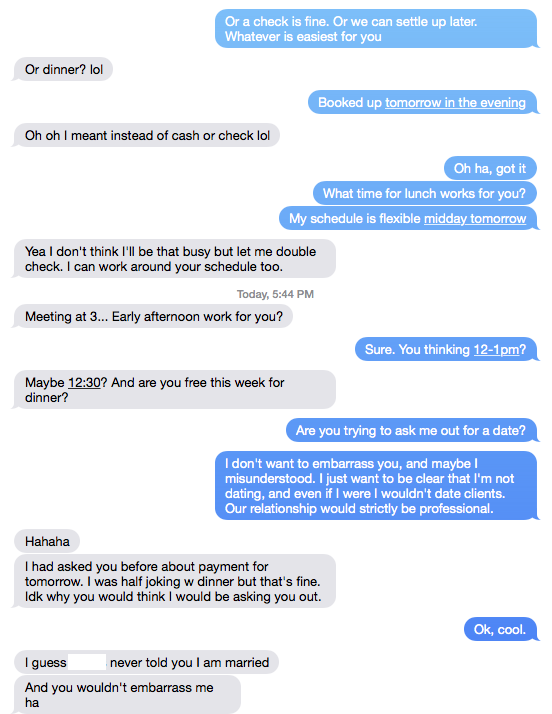 “IDK why you’d think I’m asking you out! All I did was invite to you to dinner twice, after we’d already scheduled a lunch meeting! Also, I’m married! Married men never hit on strange women, and they certainly never use their marriage as a smokescreen to escape from a pickup gone wrong…”

For the record, I don’t think it’s necessarily a violation to ask your trainer out this way–it’s not as if he waited until she was alone with him and vulnerable, or wasted a bunch of her time first. Tossing the question seems reasonable, if maybe a toe over the line, but when she informs him in clear professional language that dating is not on the table, the polite thing would be to say “Sure, sorry, I understand” and let it go.

That is not the approach Sean takes. 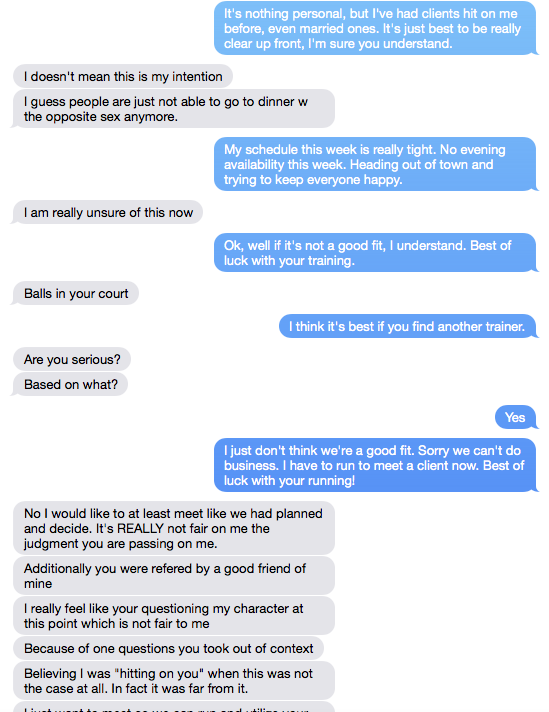 “I guess people just can’t have dinner with the opposite sex any more.” As if it’s the trainer who’s committing the cultural offense here. A piece of advice for anyone considering Sean’s approach: You’re hiring a running coach, not an escort. She’s selling you her expertise and her training, not her company.

Sean tries to play this off as a big misunderstanding (probably worried that word of the exchange will get back to his wife, or to the good friend who referred him) but as Liz pointed out, he almost certainly would not have asked a male running coach to dinner at all.

To Liz’s credit, she stays totally professional in her language, despite wanting to let the guy know what a douche he is. She’s even a little more deferential than she probably should be–a diplomatic tactic Sean would do well to pick up.

That was the last message in the Monday exchange, as Sean apparently got the point. Then today, one last follow-up:

Now, of course it’s tragic if this man has cancer, no matter how sexist or entitled or manipulative he may be–but speaking of manipulative… even if you think you have cancer, how dickish is it to lay guilt at the feet of a total stranger? Liz’s response (to me; she didn’t answer the text) was “Why the hell would that make me feel better?”

The moral of this story? Don’t be a dick. Because your running coach may end up schooling you in an entirely different way.

Chris is an author, artist, and nonprofit fundraiser. His work has appeared in The Nib, GOOD, the Huffington Post, Salon, and MTV news. Chris lives in New York City.
Previous Story
A Minor Mishap
Next Story
Liz was interviewed by Women’s Running

One Response to :
How not to hire a running coach