It Was Never About Liberty 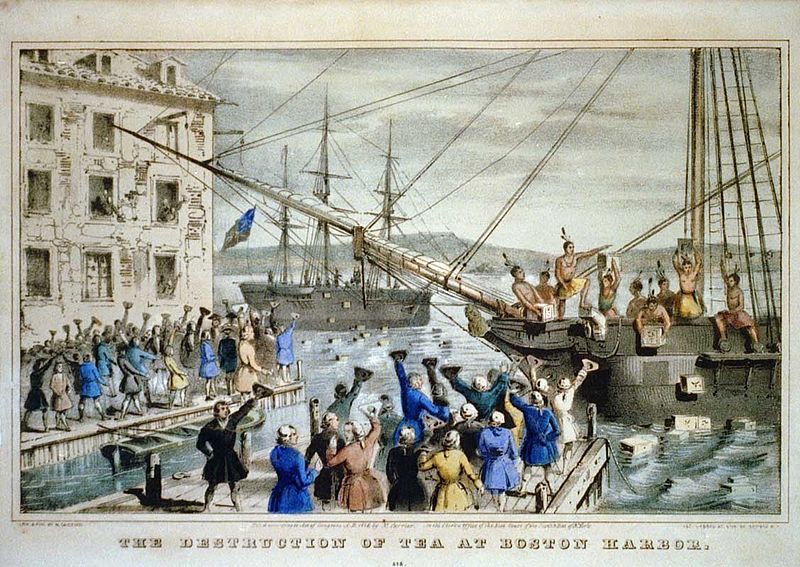 Americans all know the story of the Boston Tea Party: On December 16, 1773, a mob of patriots known as the Sons of Liberty, disguised in charcoal blackface and Indian dress, boarded a fleet of ships in Boston Harbor and destroyed a shipment of English tea. But what motivated the Sons of Liberty to cast a million (2018) dollars worth of tea into the water? It was the Tea Act, a tax increase that increased the cost of tea in the colonies. Right?

Well, no. It’s true the Tea Act prompted the Boston Tea Party, but not because it raised the price of tea — in fact, the Tea Act reduced the price of tea imported by the East India Trading Company. This is a part of the story most Americans don’t know; the Sons of Liberty were less patriots, motivated by English tyranny, than they were merchants, motivated by reduced revenues when British tea became cheaper than the smuggled Dutch tea they sold tax-free.John Hancock, who financed the Sons of Liberty and fomented the Boston Tea Party, was a shipping magnate of enormous wealth, much of it earned by smuggling tea. The Tea Act hit him where it counted — his wallet.

The Boston Tea Party is but one episode in a long American tradition:Justifying acts of profit-seeking by cloaking them in the rhetoric of freedom.In response to some capitalist-fueled injustice (a school shooting, or mass incarceration, or cuts to social services in exchange for military funding) many of us cry “This is not what America is.” In fact, throughout American history, freedom and liberty have taken a back seat to revenue and profit.Americans who truly value liberty must understand it is breaking with our traditions, not honoring them, to put human rights ahead of profit.

In dressing as Indians and applying blackface, the Sons of Liberty evoked two populations denied basic human rights in Colonial America. By 1773, indigenous Americans had been pushed off of land along most of the East Coast, replaced by European colonists. Often this was done via treaty, but treaty negotiations were always backed by threat of violence, and where treaties failed, colonists used force.

The men who wrote grand words about “inalienable rights endowed by the creator” concerned themselves not at all with the rights of the indigenous people who stood between them and profit: When the English government declared, in 1763, that land west of the Alleghenies was closed to colonists and reserved to “the nations or tribes of Indians…for their hunting grounds,” numerous colonial land claims were invalidated, and prime territory for hunting and trapping made off-limits. When the thirteen colonies issued their Declaration of Independence, it included a list of offenses committed by the English king. Among them: The King’s resistance to opening new territory, and his allegiance with “merciless Indian savages.”

African slaves, meanwhile, might have obtained freedom a century earlier, if the men who claimed to hold Enlightenment ideals had put them ahead of their bank balances. Thomas Jefferson, himself a slave-owner and serial rapist, wanted to include the African slave trade among the list of King George’s offenses, but was forced to remove it so that southern states would sign. When the Constitution was drafted, Jefferson again advocated against slavery, alongside abolitionists like Alexander Hamilton and Benjamin Franklin, but again the institution was protected in order to secure the support of southern states, whose economies relied upon slavery.

We know, therefore, that Jefferson held slavery as a deplorable violation of the rights of man, at least philosophically. Historians credit him with “small victories” against the institution, like leading Virginia to become the first state to ban the importation of new slaves. And yet he personally enslaved people, because as a landowner and farmer, burdened with debt and accustomed to a wealthy lifestyle, his finances came before his philosophy. George Washington, similarly, spoke against the institution — but he too retained his slaves, including bringing them to live with him at the President’s residence in Quaker Philadelphia. When he realized Pennsylvania law meant his slaves would be freed after six months, Washington rushed to send them back to Virginia — and when one of those slaves escaped, Washington offered rewardsfor her capture and spent the rest of his life pursuing her.

We’re often taught that George Washington, our benevolent American patriarch, freed his slaves — but he did so only once his own death meant doing so would not harm him financially.

So too, if we examine men like Franklin with any scrutiny, we find their morals did not extend to their pocketbooks. Franklin, though an ardent abolitionist late in life, owned slaves well into his 60s — even though he began speaking against slavery in his 40s. He allowed the sale of slaves at stores he owned, and advertisements for slaves in his newspapers. Even Alexander Hamilton, the ardent abolitionist and Broadway hero, accepted advertisements in his New York Post promising rewards for the return of escaped slaves — one such is on display at Fraunces Tavern in Lower Manhattan. 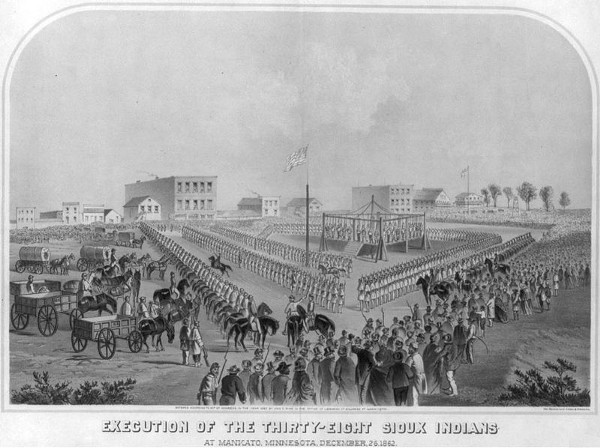 When American slaves were finally freed in the 1860s, it was famously as a military strategy, not a moral stance. Much has been written about President Lincoln’s views on slavery: In short, he personally loathed the institution, but would have allowed it to continue if it meant peace and prosperity. Less is written about how Lincoln, the “Great Emancipator,” presided over the continued slaughter of indigenous people and removal from their lands. By 1860, King George’s Allegheny boundary was long forgotten, replaced by the dream of a transcontinental railroad and commerce from sea to shining sea. When Indians stood in the way of that commerce, Mister Lincoln, he of “malice toward none and charity for all,” removed them from their land at threat of death. Where they resisted, he personally ordered them executed.

“We are not going to let a few thieving, ragged Indians check and stop the progress of [the railroads]”

After the Civil War, General Sherman (whose middle name, Tecumseh, honored a Shawnee hero of the Revolution) took a new job protecting railroad construction. The United States government, dedicated in Lincoln’s words to “the proposition that all men are created equal,” had signed a great many treaties with the Indians of the Great Plains. Where those treaties obstructed commercial interests, however, Sherman broke them. The same scorched-earth tactics that made him a Civil War hero now forced Indians onto reservations. “We are not going to let a few thieving, ragged Indians check and stop the progress of [the railroads],” he wrote in a letter to President Grant. Sherman introduced the mass slaughter of bison to deprive Plains people of the resources they needed, a practice that would become core to the US genocide against Native Americans. 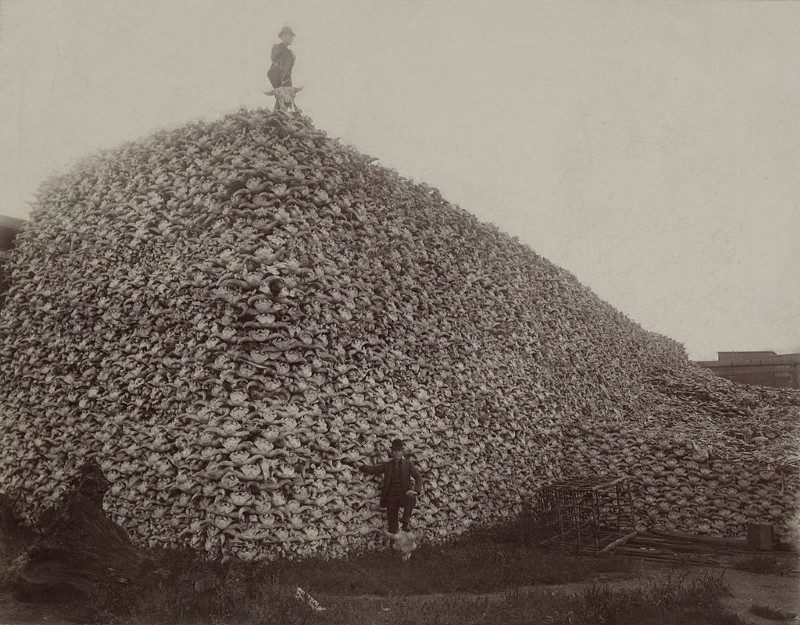 The skulls of slaughtered bison on the frontier, circa 1870s.

Moving into the twentieth century, US policy is so rife with betrayals of the concept of liberty, they are too numerous to list: From the Dole family’s violent conquest of Hawaii, to the US-backed revolution in Panama, to thenumerous instances of American support for dictatorships, whose policies favored our financial interests, over the democratically elected leaders of neighboring countries. Even as you read this, the US is accused of meddling in the recent Honduran election, backing a President favorable to our interests despite apparent election fraud. Wherever American financial interests come into conflict with liberty, freedom, democracy or sovereignty, those financial interests prevail.

It should come as no surprise, then, that today’s America spouts the rhetoric of freedom and liberty while incarcerating children for profit, refusing to regulate or even study the effects of firearms, one of our nation’s leading causes of death, and yet again violating treaties by running oil pipelines through Indian land. And yet so many Americans respond to news of these violations by claiming “This is not what America is.”

It’s not what America should be, but that isn’t the same thing. Those who want to enact change must recognize the patterns of our past. We have to admit that our country has always put profit ahead of liberty. Advancing our philosophy of liberty and equality means breaking our traditions, not upholding them.

All images from Wikimedia, used under Creative Commons license.