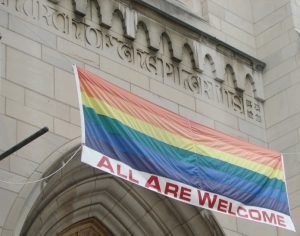 As a rule these days I try to avoid investing time and energy in online debates, but sometimes I just can’t help myself. Yesterday I got sucked into a debate at the Matt Walsh Blog about Arizona’s rightly-vetoed Senate Bill 1062, the “Turn Away the Gay” bill. I was more than a little startled by the outpouring of right-wing support for SB 1062 that followed Governor Brewer’s veto, and the arguments mounted at MWB grabbed me because they were especially heinous.

For starters, of course, there’s the standard refrain of the straight, white cisgendered libertarian male: “The solution is simple, just don’t do anything.” In this case, Walsh argues that the proper solution to anti-gay discrimination is for the government to do nothing, and the free market will eradicate discrimination. I’m not even going to spend a lot of time refuting this position because (a) it’s so incredibly stupid; and (b) if you’re here reading, you probably already agree that it’s incredibly stupid, so I won’t waste your time. Let’s just agree that if LBJ were alive, we could all share a hearty laugh about what a fantasy world some libertarians live in.

The reason I write about it here is to point out how ludicrous it is to call SB 1062, or the many similar bills in other states, “Religious Freedom Laws.” The so-called ‘right’ of Christian business proprietors to turn away LGBT people is presented as a protection of their religious observation. A government mandate to treat LGBT customers identically with other customers is, according to the bill’s defenders, a tyrannical denial of religious liberty. This is absurd on several levels. END_OF_DOCUMENT_TOKEN_TO_BE_REPLACED